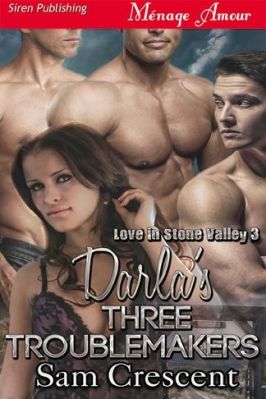 Two Stone Brothers for Tessie starts out entertaining and I made it through the first few chapters pretty engrossed in the story even with the speed bumps known as misspelled or missing words (Sam Crescents signature editing issues). Then I hit page 68 and realized I was kind of bored of the story line and hoping it would pick up soon. The worse part of the location of my boredom was it was heading into a bedroom scene, which in Sam’s stories are never boring until now. I am hoping that it is just menopause frying my brain cells instead it being the story itself.

I really like the little town of Stone Valley that Sam Crescent created and I really like the way she wrote about Markus’ dyslexia. Yes, he has dyslexia and his made some aspects of his life a challenge but was not who he is, in other words he was not his disability even as it does still bother him but you only really see that once in the story and I really wanted to kick his little brother’s ass for his dick headed low blow. I also liked how Tessie handled both brothers and their attitudes, she certainly wasn’t shy about calling a spade a spade. As for the other towns people in town, they were equally quirky and amusing and I hope to see more of them in the next book in the series.

Despite the need for better editing and the boring spot in the book the town of Stone Valley was a nice place to visit for the time it took to read the story.

Quotes
I had to quotes picked out but with how prudish Google, Tumblr and many other sites are getting I decided I really didn’t want to get censored but I am sure you would have liked the other quote as well.

“Good. My face and cock were protected last night,”—Brant

I had to go back and find the characters descriptions before writing this part. The male models do look age appropriate so in that regard they match the story. The female model does seem to have the right body type she looks much older that the young waitress described in the story. This leaves me feeling like a three-star rating is reasonable fair. The publisher could do better in the cover department.

Tessie Holland has dealt with some loss in the last five years. Her father is dead and she had to move out of her family ranch with her mother. She works at the local diner as a waitress to help pay the bills. The only highlights in her life are the mystery packages that are left on her doorstep. Who could be sending her these gifts?

Markus and Brant Stone have been in love with Tessie for a long time. They never want to see her without and have made sure she gets everything she wants by leaving her gifts, anonymously. However, they cannot wait anymore. They intend to tell her the truth and to claim her as their woman.

When the Stone brothers try and buy back Tessie’s home ranch they stumble upon some distressing revelations. Soon they are diving into something that neither brother can protect her from.

It’s a race against time to protect Tessie from the truth and to also protect her from the man who wants to end it.

This site uses Akismet to reduce spam. Learn how your comment data is processed.