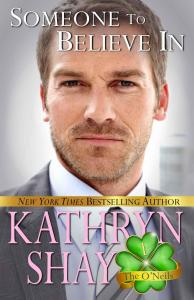 Bailey O’Neil grew up in a big loving family that was devastated by the loss of her sister to gangs. She swore she would save as many as she could from that life and even served time in prison for it. Her family is worried about her safety and that of her son. The man who put her in prison wants to put a stop to her work with gangs and not only because it is dangerous but because he is falling in love with her. When a gang member she is trying to save ends up dead she begins questioning her ability to help and her feeling for Senator Clay Wainwright.

I really do like that this author is pointing out the children that are sucked into gangs should be saved rather than incarcerated although it stands to reason that they need to want to be saved and the author also brings this out as well.

It was really easy to get to know the characters and the world that Kathryn Shay was creating in her book. You can also feel the passion that she has for her story line. I was really cheering for Taz and devastated by death (Sorry for the spoiler).

However, I ran into several boring parts and needed to take a break to read other books before continuing on with this book. Other than that it was a slow moving, in depth story that brings home the seriousness of gang life and how it can affect the family members of the gang member.

Book’s Blurb
Bailey O’Neil, aka, the Street Angel, has been the arch enemy of Senator Clay Wainwright since he was a district attorney and she a young, idealistic social worker. He put her in jail for harboring a teen offender and never looked back. Eleven years later, she’s a thorn in his side as an anti-gang specialist trying to get kids out of gangs. While Clay wants to put them in jail, Bailey is determined to help these troubled teenagers make good lives for themselves. But when Bailey and Clay are thrown together on the mayor’s task force, the impossible happens—they’re attracted to each other. Their passion erupts early on, and only grows stronger the further they get into a relationship. When they fall deeply in love, their conflicting views drive a wedge between them. Both the Street Angel and the Senator must find a way to deal with their differences in order to make a life together.