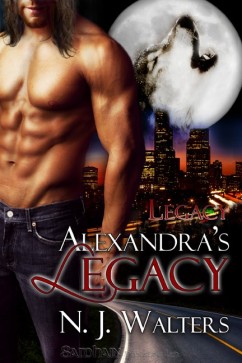 I purchased Alexandra’s Legacy back in 2011 and it was one of the first N. J. Walters books I read. The version of the book was published by Samhaim Publishing which is now defunct but thankfully like many other authors N. J. Walters has found away to keep her books from disappearing into oblivion.

Alexandra’s Legacy starts out rather slow in the beginning but progresses into a fast-paced run for life adventure that includes a car chase and gun fights with a some pretty steamy foreplay thrown in to get your heart racing and desire to rip your significant other’s cloths off. If you think the foreplay is hot the actual sex scene will rock your socks off.

Alexandra may be fast becoming Joshua’s

N. J. Walters writing is impeccable in Alexandra’s Legacy, the writing was so smooth with out a single edit that I would usually notice. In addition, the story flowed from one scene to the next with in the allotted time frame without inconsistent time distortions making it a well thought out story. You can actually see how much care N.J. Walters put into producing a well written story.

I picked Alexandra’s Legacy to read (again) because I am still going to those comfort books quit often. It’s better than emotional eating comfort foods and gaining loads of weight. Anyway, how could I lose, I got to revisit a great story and reconnect with entertaining characters. For that reason, a lone I could and will give Alexandra’s Legacy 5 stars.

Quotes
There were a lot of great quotes and choosing was which ones to use was really hard.

“We’ve had this discussion before. You’re not omnipotent.”—Alexandra

“I said she was worth fighting for, not that I wanted to be turned into a eunuch when I beat your sorry ass.”—Donovan

Book Cover Rating
My favorite part of the cover is the Moon with the wolfs head inside it. I still like this cover very much and it still stands out when I am browsing through my digital library.

Book’s Blurb
The truth will set her free…or get her killed.

Alexandra Riley’s day starts out like any other in her normal, predictable world. Then a tall, dark stranger bursts into her father’s garage and shatters the illusion. In one shocking moment, she discovers why she’s been feeling hot, restless—she’s the half-breed daughter of a legendary werewolf and is a much-sought-after prize.

Joshua Striker, enforcer in charge of protecting the alphas of the Wolf Creek pack, has come to take Alex home. Nothing more, nothing less. From the first moment he sees her, she becomes the one thing he can’t afford—a distraction from his duty. A weakness he doesn’t want—but can’t resist needing.

If only keeping her safe was as simple as fending off males on the hunt for a mate. Through city streets to the mountains of North Carolina, Alex and Joshua have to evade those who don’t want their pure bloodlines tainted with human DNA, as well as bounty hunters who think the only good werewolf is a dead one.

What Joshua and Alex can’t outrun is the passion that flares between them—or the choice Alex must eventually face. Whether to claim her inner wolf, or forfeit her chance to claim Joshua as her own.