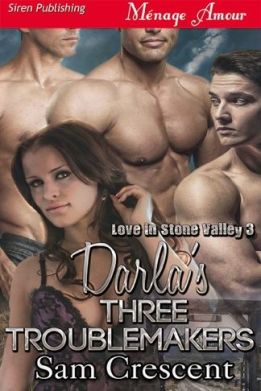 Darla’s story actually started in Ruby’s Two Sexy Hunks where is was revealed that Luke was the one who got her pregnant then left with no memory of even having sex with her. Darla’s Three Troublemakers starts out with a prologue of how she became pregnant and chapter one starts with her moving in with Luke, Jon and Ryan. From there things go from bad worse as they work on their relationship while adjusting to the discovery that baby number 2 is on the way.

I do have a couple of questions like during the move how is Jon grabbing kitchen equipment and settling with the land lord while Ryan lugs suitcases? Just curious about how someone can be in two places at once. The next question is who is Darla eager to have sex for, her friend Tate or herself? I mean people really should have sex because feelings are involved not so their friends have something to talk about. Don’t get me wrong the sex scene was steaming hot and only had one flaw and that was just some brief confusion about who was doing what to who, which sometimes happens when there are multiple partners to keep track of.

Unlike a lot of authors who seem to forget about their bad guy or give them a token moment during the story then not mention them until the end, Sam Crescent includes what her bad guy, Derek, pop in out of the story so we see him plotting and planning. We know it’s coming even if we don’t exactly know the where and when, making for a truly suspenseful story.

My rating for Darla’s Three Troublemakers is a going to be 4 stars because there were a few edits and those are a pet peeve of mine when reading, but I think that the editors of the story should share some of the blame in not catching those edits as well, especially knowing how well Sam Crescent can create a great story and I for some reason I can’t not buy her books.

Book Cover Rating
Okay so here is the thing, yes, the cover basically matches the story however I feel like there is something off about the model portraying Darla.

Book Blurb Rating
I like the blurb, it along with the teaser sold me on Darla’s Three Troublemakers.

Book’s Blurb
Darla has always had a crush on the Willis brothers. Luke, Jon, and Ryan are all brothers who share one thing, they are all in love with Darla. They will do everything in their power to protect her. However, one drunken night spent with Luke leaves consequences. Pregnant and alone, Darla kept the identity of the father to herself.

With the truth out, the Willis brothers set out a plan to woo their woman. They’ve always wanted to share her and now is their chance to have the woman they’ve always craved. Can Darla accept three men in her life?

Someone from their past is threatening their future. Whoever it is, is determined to hurt Darla and their knew found happiness. Can the three brothers save the woman they love before it’s too late? 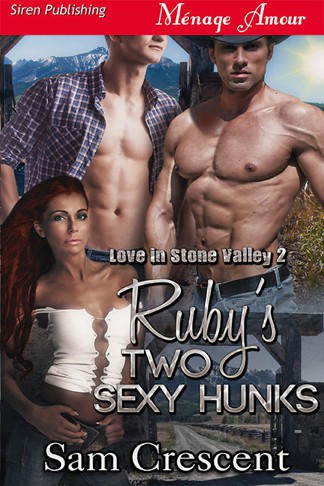 Ruby’s Two Sexy Hunks is book two in the Love In Stone Valley series and it you skip this story you may miss out on something in book three because even though the focus is on Ruby, Chris and Troy the are other stories taking place. The thing is that in the first book in the series you didn’t see much of this style of writing but you can see where Sam Crescent changes gears and spreads out to include the lives of other community members. I really liked how it was coming together and felt it was an improvement that gave a caliber of writing almost equal to that of Laurann Dohner.

Ruby’s life is clearly not boring and I really enjoyed her story, although I would have told her to send her boyfriend steeling self to stay with the parental units after what she did. But then Ruby has a big forgiving heart and clearly didn’t love the guy in question or he would have been toasted and run out of town 😉. As for Chris and Troy, I thought the best part was when they met one of Ruby’s dads and got the third degree BEFORE they even expressed and interest. Poor Ruby.

I have read a lot of Sam Crescent books and for the most part I love them all, I could probably finish reading them in a day if it weren’t for the bloody speed bumps (edits) that keep popping up in her books. The worst of the edits was when the scene involved Donald (Tessie’s dad) who then morphed into Charles (one of Ruby’s dads) vice-versa and then Jon some how became Don both moments creating a brief flare of confusion. The other edits were mostly wrong words and I am really surprised that Sam Crescent’s Beta Readers missed them because they were blatantly obvious, which makes me wonder if her Beta Readers and editors are doing their due diligence or are trying to submarine her. In either way she needs a new crew of readers to proof read her work before it gets published.

Book Cover
I am not sure that the cover fits the story, well actually I am not sure that the female model fits based on the description of Ruby I am just sore. Ruby is describes as having red hair, green eyes, large breast and a tiny waist culminating in an hour glass figure. After getting to concurring opinions I finally decided what I give the cover as far as a rating goes.

Book Blurb Rating
The blurb needs minor editing but other than that a decent blurb.

Book’s Blurb
Ruby thought she was a one man woman until two sexy hunks walk into her life. The attraction between the three is scorching. She cannot stay away from them and she doesn’t want to.

Chris and Troy never expected to fall in love but they know Ruby is the woman for them. They left their past behind in the hope to find happiness and they believe they’ve finally found it. However, someone is out to hurt their woman. When Ruby’s life is put in jeopardy, they have no choice but to take over to keep their woman alive.

The past always finds a way of catching up. Someone Chris and Troy left behind is determined to stop them finding love. Can they save Ruby in time, or will it be too late? 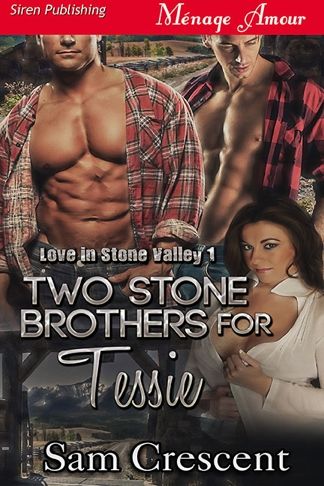 Two Stone Brothers for Tessie starts out entertaining and I made it through the first few chapters pretty engrossed in the story even with the speed bumps known as misspelled or missing words (Sam Crescents signature editing issues). Then I hit page 68 and realized I was kind of bored of the story line and hoping it would pick up soon. The worse part of the location of my boredom was it was heading into a bedroom scene, which in Sam’s stories are never boring until now. I am hoping that it is just menopause frying my brain cells instead it being the story itself.

I really like the little town of Stone Valley that Sam Crescent created and I really like the way she wrote about Markus’ dyslexia. Yes, he has dyslexia and his made some aspects of his life a challenge but was not who he is, in other words he was not his disability even as it does still bother him but you only really see that once in the story and I really wanted to kick his little brother’s ass for his dick headed low blow. I also liked how Tessie handled both brothers and their attitudes, she certainly wasn’t shy about calling a spade a spade. As for the other towns people in town, they were equally quirky and amusing and I hope to see more of them in the next book in the series.

Despite the need for better editing and the boring spot in the book the town of Stone Valley was a nice place to visit for the time it took to read the story.

Quotes
I had to quotes picked out but with how prudish Google, Tumblr and many other sites are getting I decided I really didn’t want to get censored but I am sure you would have liked the other quote as well.

“Good. My face and cock were protected last night,”—Brant

Book Cover Rating
I had to go back and find the characters descriptions before writing this part. The male models do look age appropriate so in that regard they match the story. The female model does seem to have the right body type she looks much older that the young waitress described in the story. This leaves me feeling like a three-star rating is reasonable fair. The publisher could do better in the cover department.

Tessie Holland has dealt with some loss in the last five years. Her father is dead and she had to move out of her family ranch with her mother. She works at the local diner as a waitress to help pay the bills. The only highlights in her life are the mystery packages that are left on her doorstep. Who could be sending her these gifts?

Markus and Brant Stone have been in love with Tessie for a long time. They never want to see her without and have made sure she gets everything she wants by leaving her gifts, anonymously. However, they cannot wait anymore. They intend to tell her the truth and to claim her as their woman.

When the Stone brothers try and buy back Tessie’s home ranch they stumble upon some distressing revelations. Soon they are diving into something that neither brother can protect her from.

It’s a race against time to protect Tessie from the truth and to also protect her from the man who wants to end it.