Poor Hazel first being abandoned by her mother and rejected repeatedly by the clueless Oliver, then to be rejected by a not so clueless Oliver the Idiot, when she is vulnerable. Good thing Hazel is made of sterner stuff most girls would run for the hills rather than stand strong.

The Dynamic Duo that makes up the talented Moira Rogers certainly know how to spin a good yarn. I like this series because of the way it’s based on the future but reverted to the pasted. I hope there will be a lot more tales from this world that Moira has created.

Book’s Blurb
Hazel Young is a rare commodity in town: a young, single female whose first mating is nearly upon her, and she’s spent the last two years fending off suitors. After all, there’s nothing flattering about being wanted for the heat in her blood instead of for herself…especially when she gave her heart away to Oliver Russell years ago. But Oliver seems to feel nothing for her but fond kindness, and the time has come to choose a mate before the wolf makes the choice for her.

When Oliver happens across Hazel being pressured by a local who wants to be her first, it awakens protective instincts he thought he’d set aside with the death of his wife five years ago. With Hazel in heat and no time to get her to safety, they wind up in a fishing shack on Lonely River. They have no choice but to ride out her mating fever together…even if the last thing he expects is to be truly tempted by her inexperienced attempts at seduction. 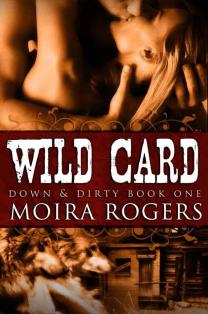 Short, Sweet and Steamy are three good words to describe this book, that I have read twice as of today. Reading about a war that has humans giving up on all modern conveniences had me missing my e-reader and laptop while enjoying the simplicity of the life they live after the war.

Book’s Blurb
As Alpha of the Lonely River Pack, Jack Owens is responsible for keeping the peace between what’s left of the human population and the wolves who have taken over since the War. All wolves are his responsibility—even the ones like Virginia Howard, who don’t recognize his authority.

Ginny’s been a thorn in Jack’s side since she took over her parents’ operation and established herself as one of the area’s premiere ranchers. The fact that she’s everything he wants in a mate makes it hard to stay away from her…but any good hunter knows how to bide his time.

Ginny fights hard to maintain her independence from men, human and werewolf alike. The humans may not like having a woman as their chief competition, but they’re not the ones determined to see her submit. When a group of angry wolves try to run her out of business, she’s forced to accept Jack’s assistance. But in saving her ranch, Ginny runs the risk of losing something far greater—her heart.