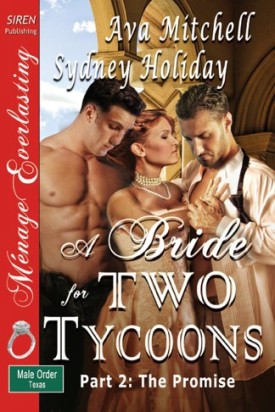 Maddie feels out of place in the Ellis brother’s world and attempts to separate herself from them.

So, I am thinking and asking myself why would two very smart talented writers decide to go and split a story into to two books when it would have been better to publish it as one complete book. This one even starts at Chapter 8, which explains the lack of a cliff hanger in the first book. It was a stretch finding things that I really liked about this book, besides the steamy hot sex scenes. I really got a kick out of the sister, Bea, she was a hoot when she was giving her brothers a hard time. I also liked that there was a bit more action than in the first book with the bad guys being mean, bitchy and downright vicious. The absolute best thing that I could find about this book was there were no typos, misspelled words or inconsistency in this book at all, and for that reason alone I am given this book an extra star in its overall rating.

Book Cover Rating
Given that this cover is the same one on the first book, making my opinion is the same, while also adding a little creativity does go along way when it comes the cover.

Book’s Blurb
Madeline Spencer has two things on her mind: securing funding for her non-profit—and the devilishly handsome Ellis brothers, two of the most coveted billionaire bachelors in Male Order, Texas. After a fairy tale courtship full of candlelit dinners and jet-setting getaways, Madeline may just be ready to give her heart to her gallant suitors, but their blue-blooded world may be too rich for someone like her.

Dalton and Garrett Ellis are set on making Madeline theirs forever. They just have to convince her that two real, red-blooded Texas men lie beneath the glamour and wealth—and they will go to great lengths to make sure she knows just how deep their need for her goes. Little do they know that the fairy tale world they’ve so carefully woven can come undone when they least expect it.

As the annual Male Order Cotillion draws near, Dalton and Garrett unveil a sinister plot that exposed dark family secrets and could unhinge the Ellis dynasty and take Madeline away from them forever.