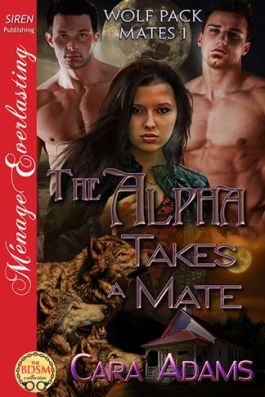 I have been thinking about this story for a few days now trying to decide how to describe it and my feelings about it. I am absolutely positive I have read The Alpha Takes A Mate before but didn’t write a review. I must have read it a long time before I started writing reviews. I feel like I have a lot to say and am a little nervous that the negatives will outweigh the positives. So, here we go…

The Alpha Takes A Mate is not exactly a good title for this story since there are TWO men in the relationship (the reason for the word MÉNAGE in the blurb, hellooo) making the title not fit the story. Kind of felt like who ever thought of the title was totally discounting Cornelian’s role in the relationship, not cool.

I really liked the characters, they were entertaining in their interaction with each other but the story line was rather anticlimactic. Wow, my husband is right, this does sound like a bit of a rant, for that I apologize. When I finally started typing I was still unsure about what my decision would be in what my rating would be, but apparently it was buried in my head all along.

Taige York, Eve Lang, and Ginny Thomas move to an old schoolhouse to turn it into a craft market. Taige’s well-rounded body calls to Jasper Lyall, Alpha of the nearby werewolf pack, and also to Cornelian Bardolph, his right-hand man. But the pack is not happy with humans living so close nearby and especially not with their Alpha befriending one.